Got a call from Mike over at Hiway tonight... after a thorough carb cleaning (and almost smoking him out of his garage) the old R5 is purring like a kitten! All she needs to keep going is a new battery! Oh yeah, and that shifter, and some new tires and cables, and inspection and registration... ugh... well, the big question has finally been answered at least...

When the bike was put away, someone had the sense to drain the tank of gas and coat everything in WD-40. Mike commented that after he had cleaned out all the gunk in the bottom that had accumulated over the years, she started up on her first kick.

I got sniped last minute on an auction for a used shifter (dang!). Another one has popped up however (NOS too - good ol’ Ebay!), so I’ll pay more attention this time an hopefully pick it up. Part numbers are as follows:

Posted by Unknown at 3:02 AM No comments: 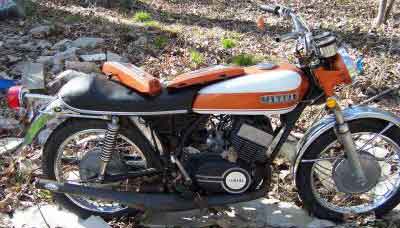 Trying to figure out what seat this is... it's exactly what I'm looking for... saw it on a bike being auctioned here, but unfortunately too late. The seller did get back to me when I asked him what brand the seat was, and this is his repsonse:

I'm sorry but i dont know anything about the seat. As far as i know its stock? I looked at the seat and theres a sicker on the bottom that says 7012.

It looks like someone took a stock seat and had it reworked and recovered. The stainless trim on the bottom appeares to be stock and the way it fits the tank tells me it was made out of a stock pan and custom covered. I'm hoping it’s a readymade product that I can scrounge up from somewhere. Anyone know otherwise?

UPDATE - Could it be a Norman Hyde seat?
Posted by Unknown at 9:03 PM No comments:

Been getting some feedback from members of yamahaydsownersgroup, in response to some newbie questions I posted there. A lot of people lean towards staying stock. One response in particular contained some real good stuff, so thought I'd pass it on:

Safer/better/more reliable?--Number one is tires. On R5's the tires
need to be updated to moderns---no ribbed fronts. Dunlops may be the
only ones available in your bike's size. Number 2 either change the
front brake shoes or have them rechamfered/grooved. Stock R5 front
brakes come on very sudden and will toss you in a sec. Number 3 is
replace the rear shocks with moderns. Number 4 is replace the
swingarm bushings with bronze sintered, and just change the fork oil
to good moly-based 10-15wt. Number 6 is replace the horn.

See where this is going??--Nothing to do with cafe or engine mods.

Only ergonomic item would be to go to low-rise euro-styled bars,
also called "BMW bars". Please don't go to flat bars; you'll hurt
your neck at best, won't be able to see at worst. The stock seat is
a plank, but is still more comfortable than cafe seats. Leave the
footpegs alone until later; most rearsets make shifting balky and
make the rear brake less effective with shorter brakearm. Any
concerns about grounding the stock under-pipe footpeg brackets is
from old magazine hype. This was always magazines' complaint about
R5/RD's.

Also posted more links I’ve found...
Posted by Unknown at 10:43 AM No comments:

Email ThisBlogThis!Share to TwitterShare to FacebookShare to Pinterest
Labels: Technical

Added a whole bunch of links, including an interesting troubleshooting article on the R5 from rec.motorcycles.
Posted by Unknown at 2:29 PM No comments:

Plans for the bike include:
- remove the sissy bar (even though it is kinda cool)
- install a solo seat (something like this) -OR-
- install a solo seat cowl (like this) and retain stock seat -OR-
- just retain and clean up the stock seat (most likely)
- tail light blinker
- clubman, drag or superbike bars (clip-ons too expensive)
- bar-end mirrors
- new grips (will need new ones with above mirrors anyway)
- (perhaps) debadging
- (perhaps) rear sets (if I can find them to fit, or make them)
- (perhaps) a café fairing (ultra-small, like this one)
Posted by Unknown at 11:14 AM No comments:

A friend of my boss Brian races a Suzuki GSX-R and has an enclosed trailer for hauling the bike to and from the track. Good thing it's enclosed, as it had been raining here for about four days straight. He picked up Brian’s 1971 Triumph Bonneville and his fianceé’s Yamaha (not sure of the model) before heading out to Trevose where my bike had been stored for the last 25 years.

In the meantime, I brought over my money order and met with Albert, the owner of the bike. Extremely nice gentleman. He related the story of the bike to me. He is a builder by trade, and a friend of his owed him money and was unable to pay him. So he gave him this bike. Albert was interested in riding at the time, as he had friends who rode. He told me about this bike and how deceptively quick it is. He could beat his friend’s Triumph off the line up to 85mph! I didn’t even think this 350 could get up to that! At any rate, Albert got busy with work, and one day he parked it in the garage. One thing lead to another, and there it sat for 25 years. His youngest son Andy (who had posted the eBay auction, and whom I met when inspecting the bike before bidding) had swiped the shifter from the bike to put on his ATV a few years back, so that’s why this piece is missing off the bike. Other than that, the bike is as it was when originally purchased. Albert was even nice enough to include the shop manual for the Yamahas of that year. Excellent stuff, everything needed is in there.

So we went over to the local notary, paid my $65 (sheesh!) to get the title transferred, and a few minutes after we got back Brian and Jim pulled up in the trailer. After a bit of ratcheting and securing the bikes, we were off to Hiway Motorcycles in Hatboro. Brian’s friend had just opened the shop, and has about 15 Harleys in various states already there. We unloaded the bikes, parked them in the garage, and now I await an estimate of what it’s going to take to get her running again.
Posted by Unknown at 12:52 AM No comments:

I won the eBay auction for a 1972 Yamaha 350 R5-C motorcycle located in Trevose, PA, not far from where I work in Hatboro, PA. Here is the original auction description:

The item you are bidding on is a 1972 Yamaha R5-350 motorcycle. It has a two cylinder two cycle engine and it has 3,000 original miles on it. The motorcycle is all original with original tires. The bike has been in storage for 25 years, ran prior to being parked and is being sold as is. It has a small dent on the gas tank and is missing the gear shifter, otherwise it is in very good condition. The color is orange and black. Any questions, please feel free to e-mail me. Local pick-up only unless prior arrangements have been made.

I was the only bidder, and won the item for the opening $550 US bid. The bike came with the original owner’s manual and complete original toolkit. Everything was in amazingly great shape. Everything worked, no exterior rust, no dry rot, no cut wires, all the rubber was soft. Tires will need replacing though. Brakes worked fine, no rust in the tank and there’s compression... the engine sounded like it wanted to turn over! The pictures made the bike look pretty good, but it looks even better in person! A few hours with some chrome polish and wax and she’ll look like she just came off the showroom floor.

I’ve made arrangements to pick it up and trailer it to a shop near work on Wednesday, April 14th. There it will be looked over and I’ll get an estimate on what it needs to become road-worthy once again.
Posted by Unknown at 10:13 PM No comments: