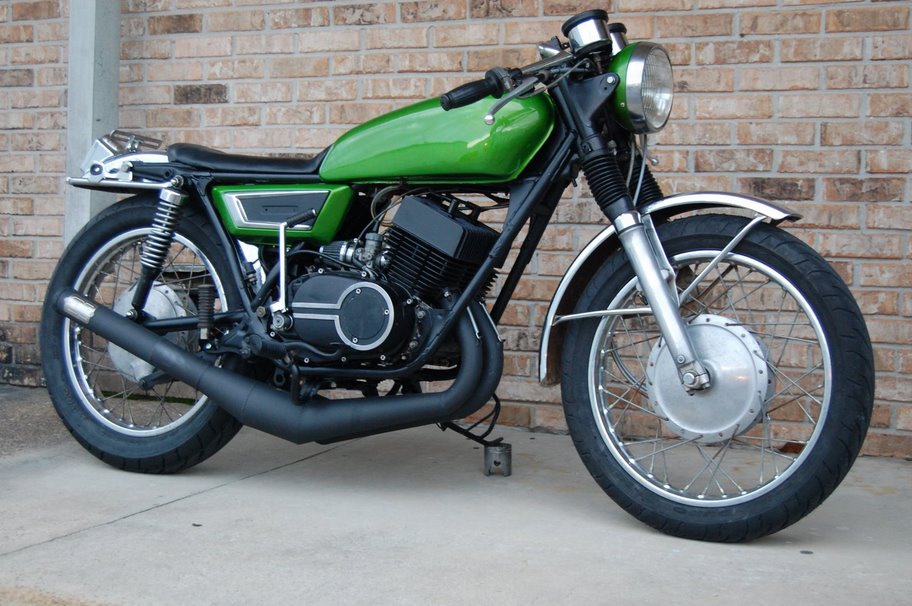 Cole wrote in this morning with some photos of his great bike:

I've been lurking your site for a few months when I bought me a 72 R5c.... it supposedly just needed to have the carbs cleaned and the airbox reconnected to run. Well 4 months and lots and lots of parts later it is finally finished! Or at least finished for now. I attached a few pictures of it... It has a new top end bored out 4th oversize, new DG exhaust, new paint, tires, etc, bobbed rear fender.

Love that seat and the bobbed rear fender. Gives the bike such a purposeful look... 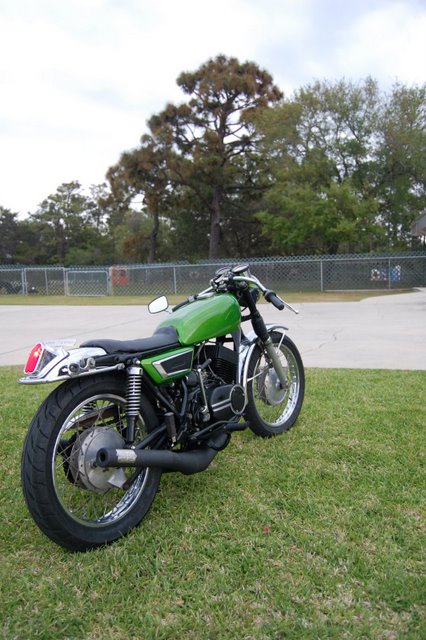 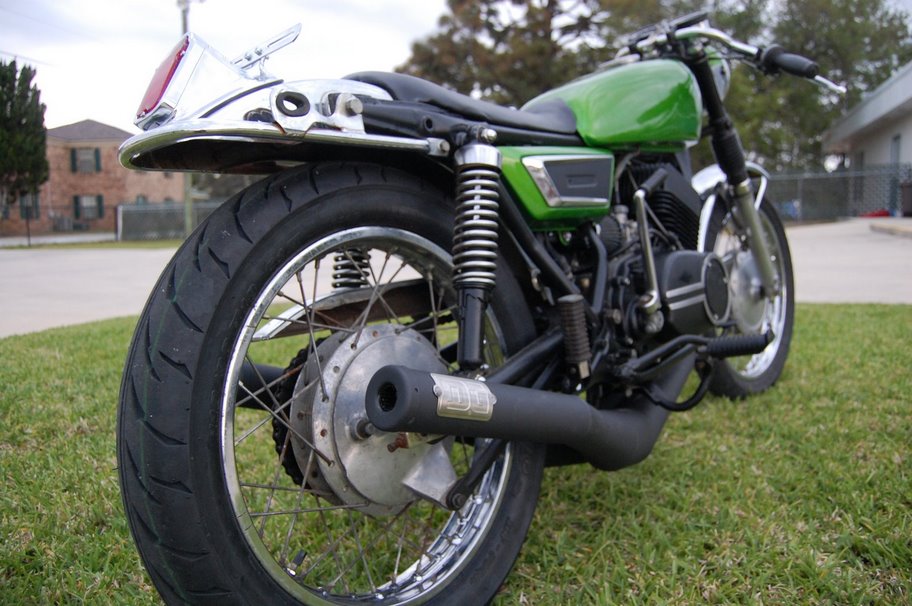 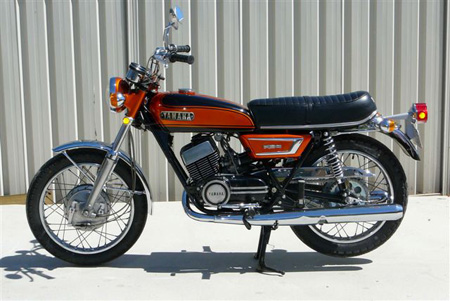 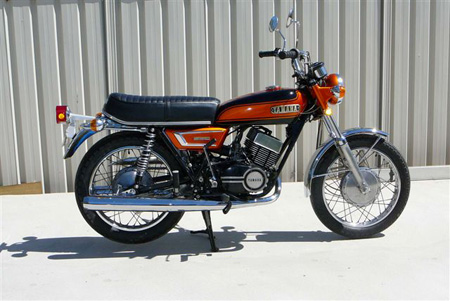 Jeff Gascoyne is located in Kangaroo Flat, Australia (about 150 km north of Melbourne) where they have an active group of early Japanese bike enthusiasts. Above is Jeff's bike, and below is something Jeff wrote for the vintage Japanese Motorcycle Club Inc (Australian Branch), Central Victorian Region newsletter called Jap Torque:

I have recently completed a full restoration of a 1972 Yamaha R5C that I have owned since around 1978. It was used daily, mainly as a commuter, until the EPA sent me a letter in 1995 informing me that it was emitting excessive smoke, which it was. The bike has been a project bike since then with progress being very slow until quite recently.

The R5C was the forerunner to the RD models and in its day was quite a quick machine. Yamaha claim a top speed of 160 km/h plus. The engine is a 2 stroke air cooled, 5 port, parallel twin cylinder with a capacity of 350cc. The net weight of the bike is 141kg and the maximum output of the engine is 36 BHP @ 7000rpm. Maximum torque is 28.0 ft lb @ 6500 rpm. The braking system uses drum brakes front and rear. The fuel tank has a capacity of 12litres and the bike has a 5 speed gearbox. The bike was finished in mandarin orange.

The bike has been completely disassembled. The frame, swing arm, tail light bracket and some other parts have been powder coated. New swing arm bushes have been fitted, as well as front and rear wheel bearings and seals, steering head bearings and brake shoes.

The front fork legs were pitted and I sent them to Queensland, Rad Hard Chroming, for repair. They were great to deal with and did a terrific job. The forks have new seals and the aluminium outers have been polished and have been assembled ready to be fitted to the bike.

Most of the chromed pieces, i.e. mudguards, brake levers, chain guard, mufflers and various other pieces have been rechromed. I have used the local electroplater and have been pleased with their work.

The seat frame was very badly rusted with sections eaten away. I rebuilt the frame using sheetmetal and then encased the frame with fibreglass matting. I then sprayed it black with epoxy paint. It looks like it will do the job very well. I purchased a new seat foam and cover from HVC Cycle and had it fitted by a motor trimmer..

The engine has been fully dismantled and the cylinders rebored and fitted with new pistons and rings. The crankshaft and gearbox were inspected and found to be ok.

I have bought new sprockets that will suit an o ring chain (530) as the original chain is a 525 which is not available in an o ring chain. I have kept the same ratio, 40:15.

Obtaining parts has not been the problem I thought it would be. Richard Penna (a local motorcycle dealer) has been particularly helpful and it is surprising the stock he has. I have purchased parts from overseas from two places, HVC Cycles (www.hvccycle.com) in the USA have been excellent as have CMS (www.cmsnl.com) based in the Netherlands. Most parts I have been able to obtain are genuine Yamaha (i.e. handlebars, seals, petrol and oil hoses, etc.).

Painting was done locally and I have been very pleased with the result. I was not able to find the original paint code (mandarin orange and black) as I intended to keep the paint as close as possible to the original.

The bike runs perfectly, is registered and on club plates and I have recently joined the VJMC and have enjoyed catching up with like minded enthusiasts. I would be pleased to hear from anyone in regard to my project and would value advice and opinions given.