One of the problems my bike suffers from (and I'm sure many bikes of similar age) is rotting or missing rubber parts. Nothing major, mind you, but simple little things like the battery and airbox straps, bodywork bushings, and lever rubber - things that don't need to be there for the bike to function, but sure would help finish things up. Details.

Well, HVC is now carrying a whole bunch of hard-to-find spares. Here's a list of the things I'll be picking up in the near future:

Email ThisBlogThis!Share to TwitterShare to FacebookShare to Pinterest
Labels: Vendors

Glass From The Past updates, new products

I was pleasantly suprised when I visited Glass From The Past today and found a fresh new site. There's a bunch of new products, as well as a few galleries of customer bikes and nifty old adverts. Drop by and admire those slick cafe seats!
Posted by Unknown at 5:47 PM No comments:

Email ThisBlogThis!Share to TwitterShare to FacebookShare to Pinterest
Labels: Vendors

There's an auction for a nice-looking R5-C on eBay right now... thought I'd pass it along...

I watched The Fast and the Furious: Tokyo Drift last night. I know, I know... but what can I say, I'm a motorhead, and anything like this interests me. Despite the bad acting, the movie was actually pretty good, better than the other two - that's for sure. Anyways, I digress.

For a movie supposedly set in Japan, you would think there would be some motorcycles around somewhere. There were a few scooters... and a few bicycles... but as far as I could tell, only one motorcycle. And it was a chopper with NOS bottles for fuel tanks. A chopper! In Japan! The only motorcycle! Wha?

I guess I was hoping to see a little more sportbike-sportscar crossover in this film... o well.
Posted by Unknown at 6:03 PM No comments:

Email ThisBlogThis!Share to TwitterShare to FacebookShare to Pinterest
Labels: Movie

Instructables has a great step-by-step how-to on lacing wheels. Although the wheels in the example are from a Royal Enfield Bullet, the info within is still an excellent read. I've seen the motorcycle builds on TV and this process has always confused me. Check it out.
Posted by Unknown at 1:11 PM No comments:

Email ThisBlogThis!Share to TwitterShare to FacebookShare to Pinterest
Labels: Technical 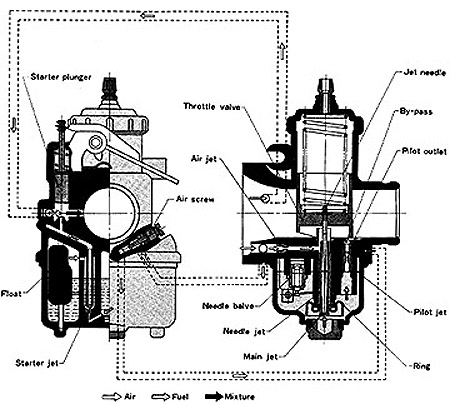 Just came across this handy manual on the Mikuni USA carburetor owner's and tuning manuals page. This downloadable and printable manual helped me understand the inner workings of my VM carbs. Below is the direct link to the relevant PDF: