A friend passed this to me this morning:

Highly collectible Yamaha TZ250A fully restored to original specifications. Motor and transmission rebuilt with good crank.Transmission checked and shimmed. All new gaskets and seals. New barrels were stripped on the original chrome because original chrome tends to flake, and were re-plated by Millenium Technologies with modern longer lasting plating.

Complete T1A Hitachi race CDI ignition. The ignition was checked on a test bed, and the slow speed coil was rewound to original specs by Motorcycle Electrics in Colorado. Now has a big fat blue spark from very low revs. Carbs are correct including the phenolic resin spacers and brass clamps. The tacho is mounted on a set of NOS rubber dampers that I have had for years just waiting for the right project.

The frame is in great condition with none of those annoying cracks that TZ's are often afflicted with. Swingarm is OEM and I had to get new bottom bolts fabricated to the original design out of stainless steel. Hardware was replated in bright zinc where necessary.

This bike is 99% original and needs only the correct front fender to be perfect. Reproduction fenders recently became available from Meed Speed in the UK. It even has the correct forks with the gull top triple clamp and double diameter staunchions and big drum brakes along with those fiunky sping mounted exhausts. The bike had been retrofitted with later type mufflers, and they were removed and the pipes professionally repaired to orginal.

Paint on the frame, swingarm and bodywork is better than original Yamaha race type piant but it was not over restored. This bike would look great in your collection or private museum or take it out for a track day, but I would swap out the pipes if you don't want to damage your hearing.

The seat has been recovered with a Meed Speed cover and it's really hard to get the shape right. I think it looks fine, and it replicates the stock slight step in the foam. Fairing is the US style used by Saarinen, Roberts and Carruthers at Daytona. It is fitted with the optional left brake - right gearshift favored by British. The brake and gear shift veres can be swapped to the "normal" side in about 2 minutes.

It is fitted with two new/almost new AVON race tires, but they are already a few years old and I would strongly recommend new rubber if yu want to run it round the track. I have the 3.00x18 Dunlop Triangular KR76 front tire if you want it for museum display. There are two sets of footpegs with teh bike. A nice looking afytermarket set and aless pretty original set of pegs.

This is not some hastily cobbled together bunch of worn out parts or modified street bike bits. It's all TZ and i built this one to replace the one I sold a few years ago. As usual, when I finish a project I take lots of pictures and then start the next project. I'm an engineer not a collector, so it's time for it to go to a new home. It is a race bike and was manufactured by Yamaha as a race bike. It is not titled and cannot be titled. A bil of sale will be provided. It cannot legally be used on the street and is push started.

Email ThisBlogThis!Share to TwitterShare to FacebookShare to Pinterest
Labels: Cool Bike, For Sale, Other

Steve McQueen's international motorcycle license. Too neat, had to post.

Via welovetypography.com
Posted by Unknown at 4:57 PM No comments:

Email ThisBlogThis!Share to TwitterShare to FacebookShare to Pinterest
Labels: Historic, Other 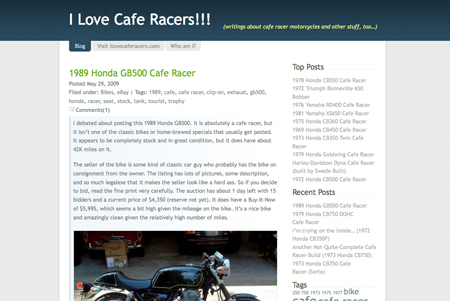 Came across this great blog covering cafe racers of all sorts. Very interesting to browse through. Enjoy!

http://caferacers.wordpress.com/
Posted by Unknown at 1:27 PM No comments: