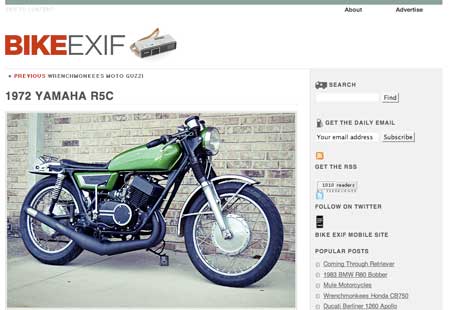 Cole Sugg's 1972 R5 (recently featured on this site) has been profiled on the excellent bike blog BikeEXIF. Here's the writeup:

There seems to be a growing appreciation of super-quick two-strokes from the 1970s. Yamaha's more recent SR400 has long been the weapon of choice for most Japanese custom shops, but in the west we’re seeing more and more vintage oil-burning Yammys such as the RD400 and R5 coming out of hibernation. The 1970-72 R5 was the direct descendant of the factory TR production racers, and offered incendiary performance. Cole Suggs' restored 1972 R5C is a good-looking example: the engine has been rebuilt and bored out, a new DG exhaust and seat fitted, and the rear fender bobbed. Lawrence O'Toole's R5 tribute site has all the details. Lawrence says the R5 was "Dirty, loud, crazy quick and relatively affordable when new (and more so now!). It was, and still is, a giant-killer." We’re sold.

See the article in it's entirety here.
Posted by Unknown at 10:57 AM

Email ThisBlogThis!Share to TwitterShare to FacebookShare to Pinterest
Labels: Websites