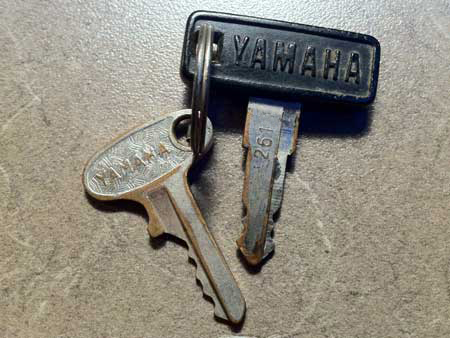 Laura from Fishtown writes in:

Have you ever gone about getting an extra key made by anyone?

Good question... No I have not. Has anyone else had to go through the process?

I've been able to locate NOS keys cut to match the code listed on the original key (if you still have one) or from the ignition or steering lock:

Hope that helps. Anyone out there have any information or experience to share?

UPDATE: Andrew wrote in with this good suggestion:

Just stumbled across the site and saw your most recent post about lost keys, i think i may be able to help. A few months ago i ended up losing both the keys to my 75' xs650b which led me to frantically start searching for replacements or what i hoped wouldn't be the only option, a new ignition. I ended up coming across motorcyclekeys.com which is run by John Blakenship out of California. Send him a copy of your title, license, and the 4 digit code, which will typically be stamped right on top of the lock (very common on bikes of this vintage) and he'll send out as many copies as you want. I ordered two keys and had them shipped priority, total bill was $35, not bad and they work perfectly. He's an easy guy to deal with and very honest, a great example of the type of mom and pop approach thats rapidly disappearing.

ANOTHER UPDATE: Philip wrote in with this eBay link...
Posted by Unknown at 5:22 PM