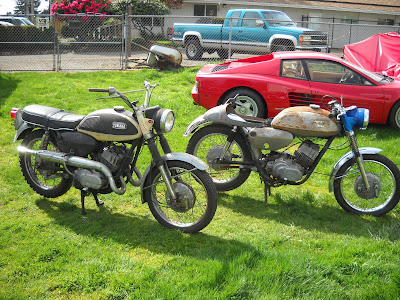 Kevin wrote in to share some interesting information about bikes from his collection:

Hello Lawrence, I am just getting into these bikes, the first ones were the 2 68 AS1s, one is very rare, because it is factory white, which I found was a rare option. I was told by the guy I bought my first 68 YR2C that there were about 150,000 AS1s made, most were blue or red, and less than 1000 were white. The first YR2C I got turns out to be a rare dealer bike, and has parts chromed on it that my other YR2C does not, and the VIN are only 260 off. The dealer bike came from Arkansas, and the other one I got in Michigan, but it came from Utah, still had the dealer sticker on it. The dealer bike was being turned into a café racer, so I bought the other bike so I could restore the dealer bike, and make the other one into a café racer. They are both very low numbered bikes. Now, after getting my first 68 YR2C, it was in the back of my truck, and a guy that I grew up next to stopped by to see if I was selling the bike, I told him no, and he asked if I wanted an old 250 Yamaha for $250. I told him yes, and he just dropped it off. That is when I found out it was an R5, and after telling him it was, he swore it was a 250. Then I found the second YR2C around Christmas, and he was close to my cousins, so they picked the bike up for me. The, in Feb, I found the 72 R5, which was turned into a GP bike, but not finished, so I have gotten RD cylinders. This bike, and the non dealer YR2C are the only bikes that will not be stock. Here are the pictures of the 2 YR2Cs, with my customers Ferrari. Thanks, Kevin