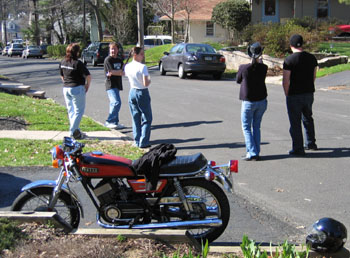 This weekend, I had parked the R5 at Brian and Michelle's house, while Brian and I went to oogle Russ' new Mini. While we were there, apparently some guy in a primer-grey pickup with a snow-plow was driving down the street, and the driver was oogling my bike. Oogling so much that he hit a car parked on the opposite side of the street. So the driver gets out, surveys the damage, and - get this - gets back in the truck and drives away! While witnesses look on! Nice one, tool!

Yet another person that should be locked in a Port-a-Potty, set on fire and pushed off a cliff.
Posted by Unknown at 2:58 PM

Email ThisBlogThis!Share to TwitterShare to FacebookShare to Pinterest
Labels: My R5, Other