Bob writes in with a rather intriguing story:

i have a 1972 R5-C that was delivered new from Yamaha with a six speed transmission instead of the standard 5 speed. the dealer told me Yamaha made 200 of these with a six speed to qualify for AMA racing rules at the time. i have tried for years to get some kind of info or documentation about these 200 bikes but have not had any luck. I have been told by some that Yamaha never such a bike and the dealer probably just installed a TR3 six speed transmission in the bike at his shop. I suppose that is possible but i was there when he unloaded the bike new still in the crate from Yamaha and he told me then about the six speed transmission. He owned the bike for a short time then sold it to my best friend and I eventually ended up with the bike and have had it in my possession ever since. I was just wondering if you have ever heard of these 200 bikes with a six speed or know where i might be able to get some info on them... serial number is R5-111013 manufactured 12/71.

Very interesting. When asked about any distinguishing features, Bob sent the following: 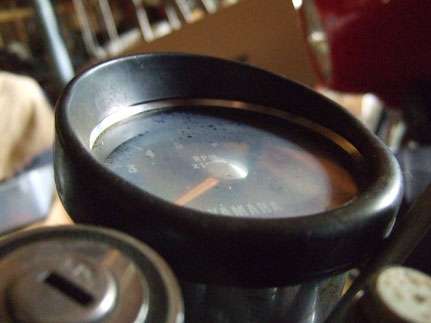 i will get some pics but it looks identical to a standard RB-C except for the rubber rings around tach and speedo... here are photos of the tach rubber on the standard bike and the "six speed" bike. notice the tall front on the rubber on the "six speed" bike [above] compared to the standard bike [below]. Maybe some other Yamaha model has that shaped rubber? Oddly enough there is absolutely no difference in the rest of the bike. 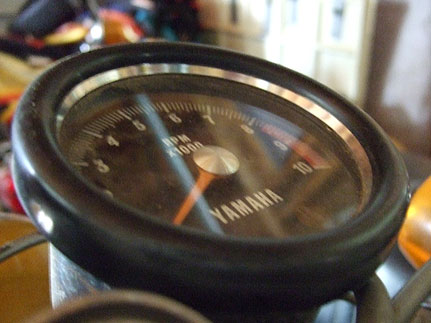 I've seen other bikes that have been homologation specials of this era, and it does seem that 200 is the magic number in order to qualify for AMA racing. Anyone have any ideas, leads, or information about this particular run of homologated specials?
Posted by Unknown at 10:57 PM