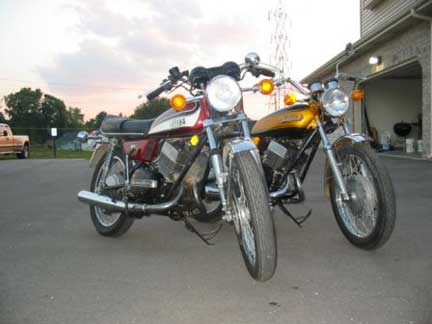 Hi, I really enjoyed your site and the nice bike. I believe you did a great job!!!

You and I have the same kind of interest. The only thing is that I am a lot older than you. I am originally from Venezuela, but I have been in USA since 1996. I am a mechanical engineer, Ihave been involved with two cycle engines since I was 12 years old.Actually I work for Bombardier Recreational Products in Racine Wisconsin. (Outboard Divison/Evinrude).

To make the story short, I restored it. It was awsome I did remember every bolt and component of this bike. Last weekend I finished, and I had a blast. It rides very nice........and the smell of two strokes is the best part! They still very fast! I think!! I also decided to find an RD350, just like my second bike............I found it. This will be my next project. Here are some of the pics. Please take a look of the DS7. It will be so nice to have your bike and mine on a photo ah?

Take care and we will keep in touch.

Ricardo - thanks for writing in! Those two bikes are real lookers! The DS7's paint looks great!

BTW... maybe you can convince those guys at Bombardier that they REALLY NEED to build the Embrio...
Posted by Unknown at 11:11 AM