Some folks wrote in over the weekend to say hi and ask a few questions about the successor to the R5, the RD350. The RDs are very similar to the R5s, sharing most of the parts, with the most notable advances between the two models being the addition of a forward gear (up to 6), a change to reed valves in the carbs, and the switch from a front drum to a front disc brake.

Chris and Lyndsay Scholey wrote in from Canada and sent a pic of their 1973 RD350: 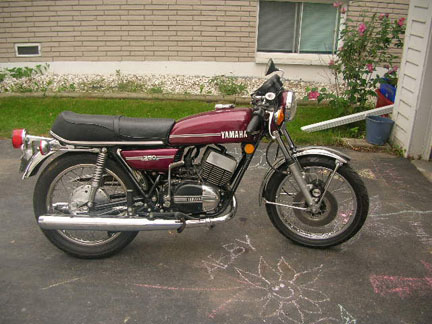 I just thought I'd drop a line and comment what a cool site you have. I bought this one about 3 months ago. It is a 1973 rd 350 the offspring of the r5 with only 4000 miles on it. I have all intentions to do what you are doing, Mildly customizing it.

The odd thing about it though is, there are no serial numbers on the motor anywhere, the left side and right side gearbox casings where never stamped. No one at the shop where I had it saftied has heard of this. Anyways in the works is aluminum alloy rims with chrome nine gauge spokes, boysen reeds, port job, electronic ignition, K&N air filter, and a proper paint job. I already started to polish all the aluminum on it. I was thinking of a set of D&G pipes, but the stock exhaust looks more vintage and I don't really want to race the thing. It sure is a head turner. It is amazing what a set of clubman bars do to change the appearance. Once again excellent site, very informative.

Wow - impressive mod list you're planning there. Should be even more of a looker when you're done! I agree with you on the pipes - on a fully-faired racer, they look great, but on a street bike that's somewhat stock-looking, with a decent amount of chrome, the low straight stock chromers just look better. And I love me some clubman bars - first mod I did when I got the bike home, after I took off the crazy sissy bar!

About the serial numbers missing, I've never heard of that either - unless the casings are aftermarket replacements. Looking at your photos, it appears some of your covers have no paint, and it just might be that they were replaced at some point. For more info on numbers, see post titled Letter from South Africa (10/7/05) below.

In the meantime, Chris and Lyndsay, good motoring! And thanks for the kind words and for sharing your ride!

And now, going a bit further south, wvgriffin writes in from North Carolina to ask a few tech questions about his new RD:

The tank is rusted fairly bad on the inside, does the Kreme kit work or should i buy a 1976 tank I found in much better shape?

I was lucky, and my bike's tank was coated in WD40 while in storage and there wasn't much rust to deal with, so I never really had this dilemma. But my tank is dented, so I looked around for replacements. But I ultimately decided to keep everything as original as possible, making only small period-correct changes (like the clubmans) where necessary.

I've heard the Kreem coatings work just fine, so if you want to keep the bike mostly stock-looking, or keep as many original parts as possible, then this is your route. but if you just want to stay period-correct and get things back on the road ASAP, then going with the better, newer tank is a good idea.

Is CDI ignition worth doing , if so whats the easiest and cheapest ?
...
Also needs a battery , saw a Battery Ellimenator (sic), should i get this or put a battery back in?

Hmmm... not being familiar with the newer RDs, I'm not quite sure how to answer this. Plus I'm not too good with the electricals on my bike, and right now she's not running due to some gremlins in the charging system that I don't have a clue as to how to remedy.

But, according to what I've read, in order to go to a CDI ignition and run a Battery Eliminator, you first must have (or convert to) a RD350LC magneto system. Something about needing to rebuild the crank, add on the LC system and reworking the wiring. Dunno which model RD350 you have.

But I'm interested in the idea of the Battery Eliminator. Let me know if you come up with anything further on the subject.

Dunno about size conversions, but I have heard that Cheng Shin makes tires that are good direct replacements (and period-correct look) for less than about $30 each, and good ol' JC Whitney carries them. I had my mechanic order a replacement front tire to pass inspection, so unfortunately I didn't do the legwork when it came to replace mine.

The engine and bike have 6500 miles on, most of chrome and other paint look great , engine runs and sounds awesome, first kick started. I plan to build carbs anyway and few other small things.

Sounds like you're on the right track! Sorry I can't help you out a little more, but thanks again for writing in! Send a pic when you get the chance!
Posted by Unknown at 1:34 PM